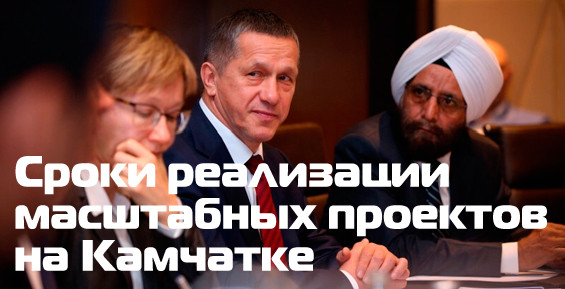 Almost simultaneously three companies involved in the implementation of projects together with the Development Corporation of Kamchatka, announced the dates for the commissioning of their three unconnected projects.

The Indian investment and energy giant Tata Power Company Ltd., which has received a license to develop the Krutogorovskoye field in accordance with Russian legislation, intends to begin commercial exploitation of mineral resources in 2023. The company's capital investments only at the first stage of field development will exceed 420 million rubles.

The Commission on Transport and Communications, led by Deputy Prime Minister Maxim Akimov, approved the construction of a new airport complex at the Petropavlovsk-Kamchatsky International Airport. At the meeting, it was announced that the terminal, "according to the submitted draft, is planned to be commissioned in 2022." The project of the complex, in addition to the airport terminal itself, includes a shopping mall, an office center and a hotel for 120 rooms. Private investments in the construction of this terminal exceed 12 billion rubles.

The other large-scale investment project, the initiators of which announced the timing of its implementation this December, relates to the creation of an all-year-round resort meeting world standards of comfort and service "Three Volcanoes". Sergei Bachin, the chairman of the board of directors of the Three Volcanoes Park and the Rosa Khutor resort, told TASS news agency that they plan to commission its first facilities in 2025. Most recently, the  Development Corporation of Kamchatka has signed an agreement with Park Three Volcanoes LLC to accompany the investment project. Investments in the creation of the resort will amount to 40 billion rubles.


“It should be considered that the fact the information on the timing of the implementation of the three largest projects in Kamchatka, even by the scale of the country, sounded almost simultaneously, is a mere coincidence. This is a pattern. There is a natural evolutionary process, which is based on the understanding by Russian and foreign business that Kamchatka is a place of profitable investment, ”said Julia Kharitonova, Director General of the Development Corporation of Kamchatka.